What happened to women? Agency and overdetermination today 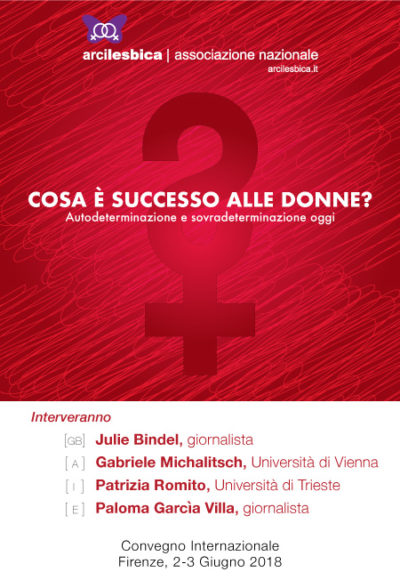 In May 2016 civil partnerships were approved in Italy and a political season come to a close. The main objective of the lgbt+ movement was achieved – even if we still do not have full equality before the law.  For a long time we poured our energy in a battle which prompted us to highlight the similarity within the lgbt+ community and between us and the heterosexual majority.  We talked about the same love and the same hearts.  It was not just a matter of obtaining a civil right: the social stigma had inflicted us a symbolic wound and we tried to heal it thanks to legislative recognition.

While we struggled to achieve equality, the neoliberal fury begun to destroy the welfare state.  And governments, recently also in Italy, tried to offset the demolition of welfare by granting civil rights (as they have a lower price tag).  So it is now time to think of redistribution, of social justice, of grounding our particular demands into a broader political vision.

As if the onslaught on welfare were not enough, the very concept of a female collective subjectivity is dissolved by the queer theory into individual performativity: in this way anyone can assert their entitlement to women’s and lesbians’ subjectivity.  The collective feminist and lesbian subjectivities are liquefied into an undifferentiated neutral one, preventing us from fighting male domination.  Many lesbians have already embraced neoliberal positions according to which selling women’s bodies on the market could be considered an expression of their agency.

Neoliberal society has taken hold of the language of feminism, in particular of words such as “right”, “choice” and “agency ” bending them to the demands of the market and thus putting forth false rights: consumerist whims are couched in the language of rights, namely the right to use women’s bodies as providers of reproductive and sexual services to be, in some cases, regulated by contract.  Prostitution becomes, with an euphemism, “sex work” and the womb for rent “altruistic surrogacy”).

However, the attempts to silence women and to force them to accept these false rights have failed.  We see signs of women’s freedom in the international Me-too campaign of women denouncing sexual blackmail and violence, in the Yo Decido campaign in Spain to defend access to abortion, in the fight of Ni una menos against violence and femicides in Latin America, and in all the struggles to defend the right to work and retire, to free education, to freedom of movement and to the right not to be rented, bought and symbolically denied.